The Battle of the Somme Lewisham Broadway Theatre

On Friday 30th September the Lewisham Local History and Archive centre will be presenting the iconic 1916 silent film The Battle of the Somme with live orchestra playing a modern score in the Broadway Theatre, Lewisham. This event is being presented as part of the Somme100 FILM project to mark the 100th anniversary of the Battle of The Somme.  The film will be accompanied by The Angel Orchestra conducted by Peter Fender.  I am really excited to be part of this project as my great grand uncles and great grandfather lost their lives during the First World War.

The accompaniment, composed by Laura Rossi was commissioned in 2006 by the Imperial War Museum for the 90th Anniversary of the of the Battle of the Somme.  The evening will include a short introduction to the film by Dr Toby Haggith, Senior Curator at the IWM and Laura Rossi, composer. 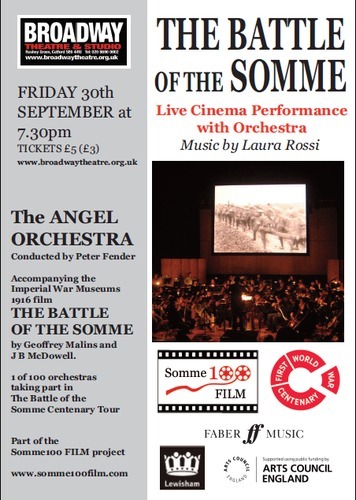 The Battle of the Somme by Geoffrey Malins and J B McDowell was revolutionary as it used footage captured by cameramen who were stationed within the British Army.  The film documents the lead up to the battle, the battle itself and the tragic aftermath.

The film, which had it’s premier in London on 10th August 1916 was viewed by so many people that it held the UK Box Office record until 1977 (when it was overtaken by Star Wars).