The North London Symphony Orchestra under conductor Ben Glassberg return to the URC Church in Palmer’s Green to bring a concert featuring works by two giants of Russian Music.  Tchaikovsky’s 4th Symphony, first performed in 1878 it sometimes is receives the nickname “Fatum” or “Fate”! As a trumpet player, this is one of the more exciting symphonies to play, in particular the opening movement fanfares where it is said that Tchaikovsky unleashes the musical equivalent of lightning bolts: two short fortissimo chords, each follows by long measure of silence.  Looking forward to that!

Robert Bridge returns as soloist in Shostakovich Piano Concerto No 2. Written for his son Maxim’s 19th birthday, he premiered it during his graduation from the Moscow Conservatory.

Faure Pavane and Brahms Academic Festival Overture make up the remainder of the program. 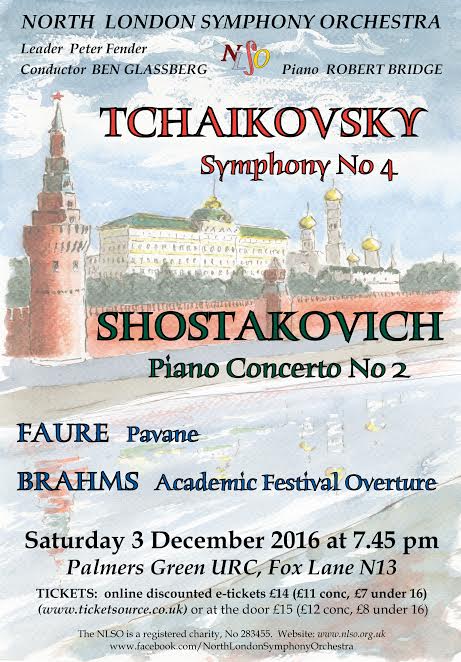 Tickets are available online at a discount from ticketsource, at £14
(£11 concessions, £7 under 16)