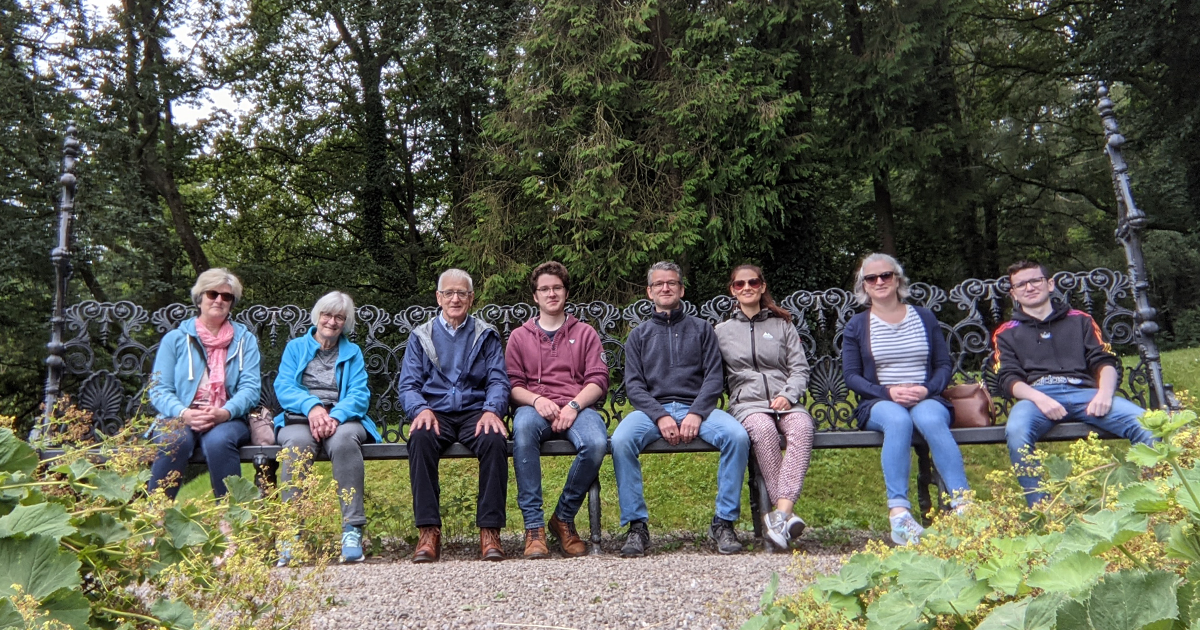 Because of you know what, trips back to Waterford to catch up with family were put on hold for a while. Since the start of this pandemic, let’s just say, it’s been an eventful time for both my family and in-laws. Thankfully, now all is good.

Travel bans during the pandemic also curtailed gatherings for a few big birthdays and anniversaries too back in Waterford (in addition to a postponed in-law wedding, and stag do of course… 🙂 ) , which I’m sure we’ll catch up on in the coming months.

I’ve now lived away from Waterford for longer than I actually lived there (a fact, my mum hates!), so it is always interesting to get back to see what has changed. To say the City has changed dramatically since I’ve left is a bit of an understatement…. yes, this were all fields when I was a lad etc. One of the new (we’ll, it’s probably years old now..) attractions is the Waterford Greenway.

The Waterford Greenway is a repurposed railway line running from Waterford City, to Dungarvan in West Waterford, running along the river and then through the county to the coast in Dungarvan. It was opened up in stages over the last number of years, gradually snaking it’s way to Dungarvan (I believe, maybe they met in the middle?). As well as spectacular river scenery as you leave Waterford City, you will encounter many stops & places to join as it is divided in to many sections, which makes it really accessible for it’s entire length. There are also many country/stately homes such as Mount Congreve on the route, as well as viaducts and tunnels, not to mention the views. I’ve been wanting to visit for many years and on this trip, managed 3 visits! How exciting! 🙂

For railway enthusiasts, there is the Waterford Suir Valley Railway, a narrow gauge light railway that runs from Waterford City to Kilmeadan along the river.

The Waterford Spraoi is an arts festival that is held in Waterford every August. I remember the first one, and have never managed to be in Waterford for this festival in the intervening years. This year, due to Covid, the festival was spread out over a number of weekends, so we managed to be in Waterford to catch one of the acts. Fidget Feet are an internationally renowned aerial dance company who for this years Spraoi, put on performances on the facade of the Kilmacthomas Viaduct (on the Greenway, see.. the connection!). Despite drizzling rain, they put on a spectacular show, abseiling down (obvs…) the Viaduct.

After the performance, we headed back to the Coach House for a coffee. One of many businesses that has setup since the opening of the Greenway, the Coach House is located at the historic Famine Workhouse in Kilmachthomas.

As a finely tuned athlete (stop laughing), it is important to keep up training schedule, especially with a half-marathon in a few days time. I arranged to meet an old school friend (or a school friend of old ?? – well, we’re both old now, but I’m still younger… 🙂 ) for a morning jog. I’m pretty sure we were in same class all the way through primary and secondary school but hadn’t really caught up really since leaving school (Summer 1989!!). We connected on social media and Strava a few years back so encourage our efforts on these platforms. Living not far from my parents house (in a housing estate that was fields when I was a lad..) we did an 8 mile or so route including one of the Greenway sections. 30 years catch up over an 8 mile trot, was good fun, hopefully we can do it again.

On the route, ran along the river, and the “Red Iron” bridge, the old railway over the river. I made comment that this was the closest I had ever been to the bridge as back in the day the brave (or stupid) lads in school would tell tales of being out on the bridge (the river is rather dangerous underneath, fast flowing, deep, tidal). One would certainly feel the business end of the Irish Mammy’s weapon of choice, “the wooden spoon” if word got out that you were anywhere near “the red iron”.

Kilfane Glen & Waterfall, Woodstock (not that one) Gardens

Taking advantage of the decent weather, we decided to visit a few places that were less familiar to us. Covid restrictions limited indoor activity (i.e. kept me out of the pubs!) anyway 🙂 Kilfane Glen and Waterfall, listed as an Irish Heritage garden is a pristine example of a romantic era garden dating from the 1780s. Located in Co Kilkenny, a 45 min or so drive from Waterford we set of to explore.

After lunch in nearby Inistioge, we visited Woodstock Gardens & Arboretum, which contains many types of trees from a round the world, including an avenue of Monkey Puzzle trees as well as rather tall Sequoias. Well worth a visit. The cast iron bench we are posing on in photo above was restored/recreated by a friend of the family.

I did also manage to get a bike ride on the Greenway before we had to return. Borrowing my dad’s bike, a Land Rover Zamora!. I cycled a route from home to the Kilmacthomas Viaduct and back. As I’d set off relatively early in the morning the Greenway was pretty quiet on way out, with the odd dog walker, runner or other cyclist. Despite being a railway line, it’s not exactly flat, there is a gradual incline as it heads out west towards the more mountainous part of the county. Was cool to get to the viaduct just outside the hour limit I’d set (I’d promised a time limit, I’d turn around and return home after 1hr on the bike!).

Next time, I plan to do entire Greenway to Dungarvan and return to Waterford via the Copper Coast road.

Street art is a big thing and Waterford has certainly embraced it, with it’s annual Waterford Walls festival. Basically, it appears to me that either property owners, or Waterford Corporation give permission for artists to decorate buildings. See for yourself, some pictures that I took mooching about.