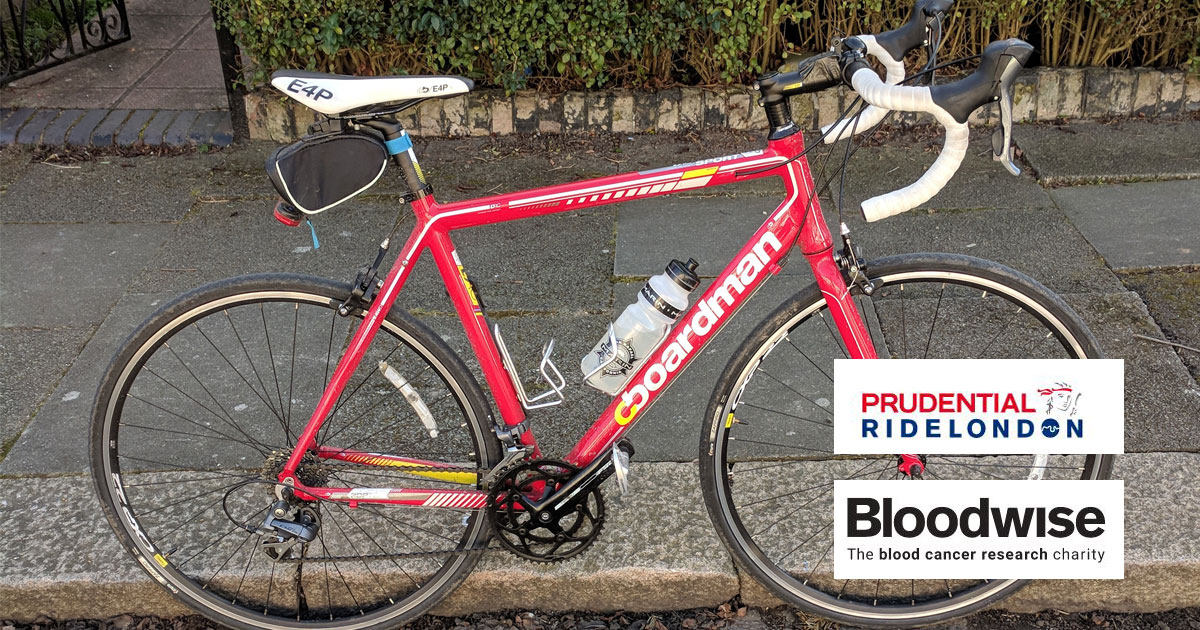 Time to officially announce our second fundraiser for Bloodwise.  I am riding the Prudential Ride London 2018 on July 29.  This will be my second time riding this fabulous event.  Last year, I followed the action from my bed in Barnet Hospital when I was in for my first spell with infections related to my Hairy Cell Leukaemia.  I followed the action using the official ride app, where I’d configured it to follow my father-in-law, Julian, Tom, my brother-in-law and friends Phil, Alex and Jim.

I didn’t win a ballot place in last years ride, so the plan was to treat the guys to a pre-ride meal the day before, ensuring they were fully fuelled up for the ride. Instead, I had the pleasure of them visiting me in hospital, where, due to risk of infection they had to stand by the door.   I know how traumatic that was for them at the time, and to be honest, I’m feeling quite emotional now as I write this.  I remember barking instructions to Julian not to go off to fast (remember you are 69 years young) and passing on words of encouragement to Tom, riding for the first time.  Both completed the ride and raised a lot of funds for Water Aid.

The good news is, all who I followed completed safely and were able to celebrate accordingly!  I promised myself there and then that I would ride next years ride.  So here I am.  I didn’t return to the saddle until I was well recovered and was officially in remission.  My first ride back was on January 28th 2018, 266 days since my previous ride.

Yesss! Bike ride at last… And the last of my “first time since hairy cell leukaemia diagnosis” series of posts! Grinning ear to ear! Feeling strong! First of my @ridelondon training rides too where I will be riding raising funds for @bloodwise. Part of my route today took me on the route between Barnet Hospital and Chase Farm Enfield where I received all of my treatment (and was my ambulance ride route between too that first day I was admitted!) #beatcancer #bloodcancer #leukaemia #bikeride #cycling #boardmanbikes #tomtomsports #saveournhs #barnethospital #chasefarmhospital

I’d already started back running, having resumed at Park Run in January.  I also had entered the Hackney Half Marathon and also entered a Tough Mudder half with colleagues from work.  I’m not doing these to prove anything and I’ve not been triggered to do these by my illness, I probably would have done these anyway as entering such events has become just something I do.  It is good however to be able to use these events to raise funds for charitable causes. 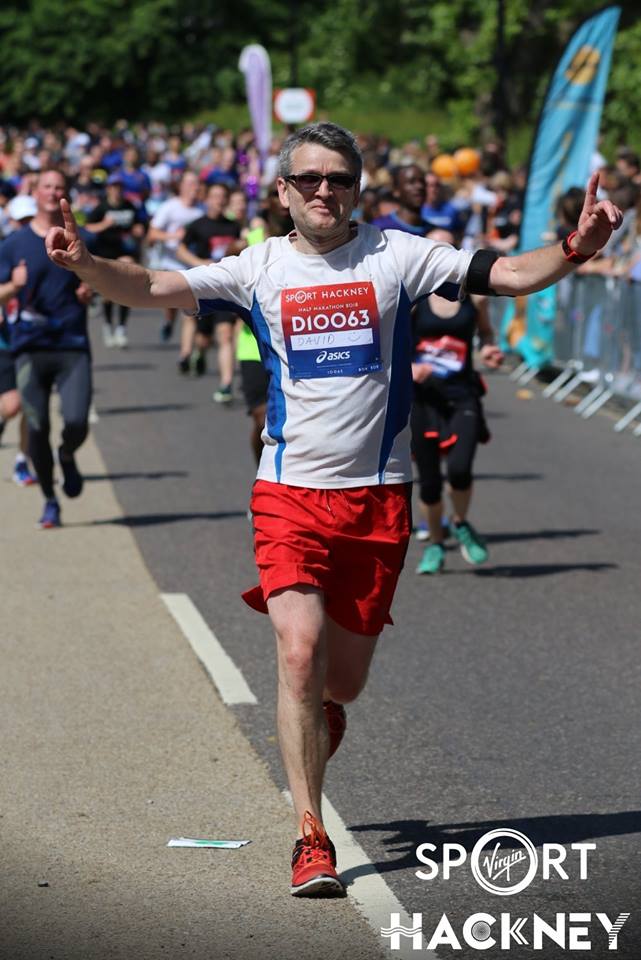 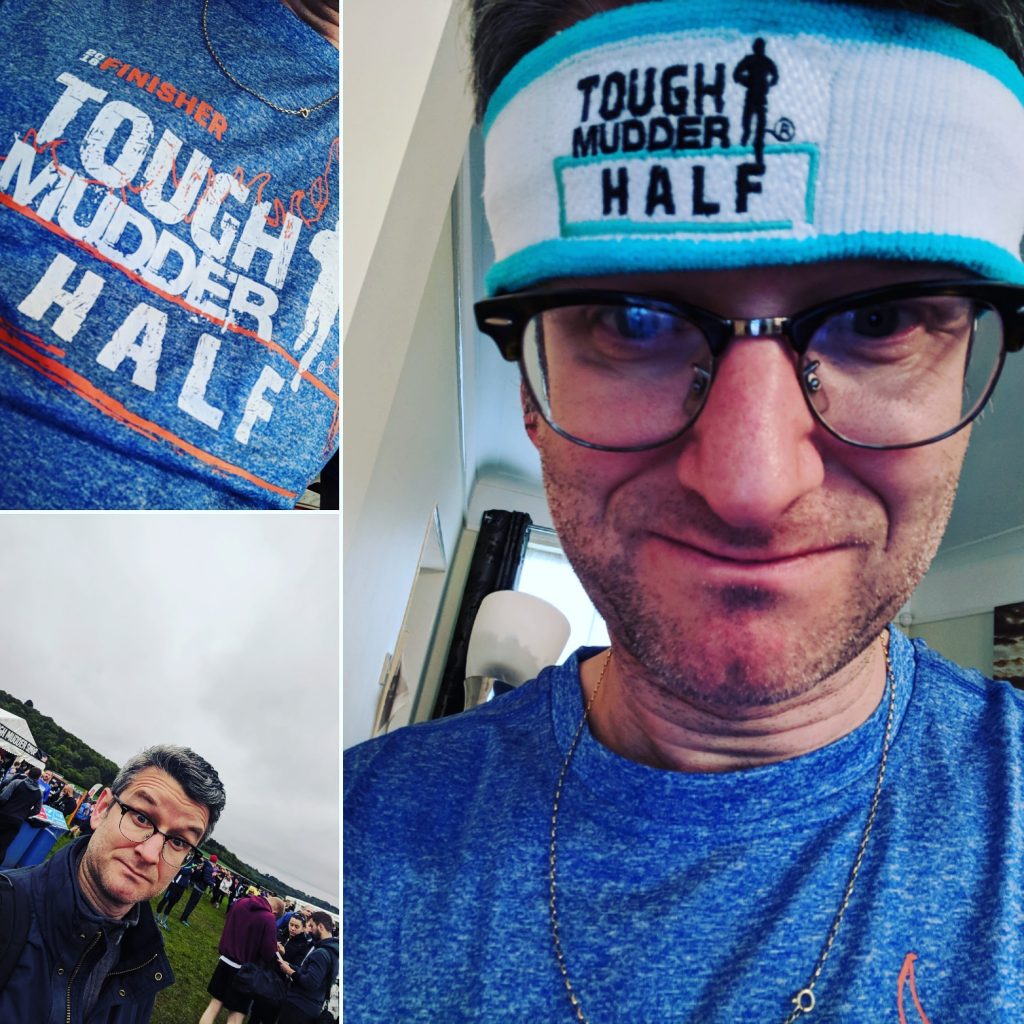 I’ve set a target to raise £1000 for Bloodwise.  I would be very grateful if you could find the time to donate what you can afford.  The more the better, but every donation counts.  Don’t forget to include Gift Aid option too if that is applicable.

The link to donate is : http://uk.virginmoneygiving.com/dqbloodwise

If you can afford to donate the price of a coffee, pint or a bit more, I would really appreciate it, as will Bloodwise… who’s mission is..

We fund world-class research, provide practical and emotional support to patients and their loved ones and raise awareness of blood cancer.

This year, both Julian (now 70!) and Tom are riding again, as is my (kind of.. removed a bit..er.. he’s married to my wife’s sister…) brother-in-law-ish Alex who is raising funds for the British Lung Foundation in memory of his mum who sadly passed away in May 2017 from Lung Cancer.  Alex was scheduled to ride last year with Tom & Julian but deferred for a year.  You will have noticed that Julian (JP to us) turned 70 since last ride, and as well as continuing to ride his bike, was awarded the British Empire Medal for services to music to the Isle of Man in this years New Years honours list (he “met” the Queen last week).  His gift from the family (Tom was “driving” force behind this.. see what I did there….) was a treat of a trip to the Monaco Grand Prix.  Alex and I grudgingly agreed to go along with Julian and Tom 🙂 … I won’t go on about motor racing…. that is topic for another day.  We did however, train together for Ride London, thanks to Nice VeloBleu.   Was great fun! 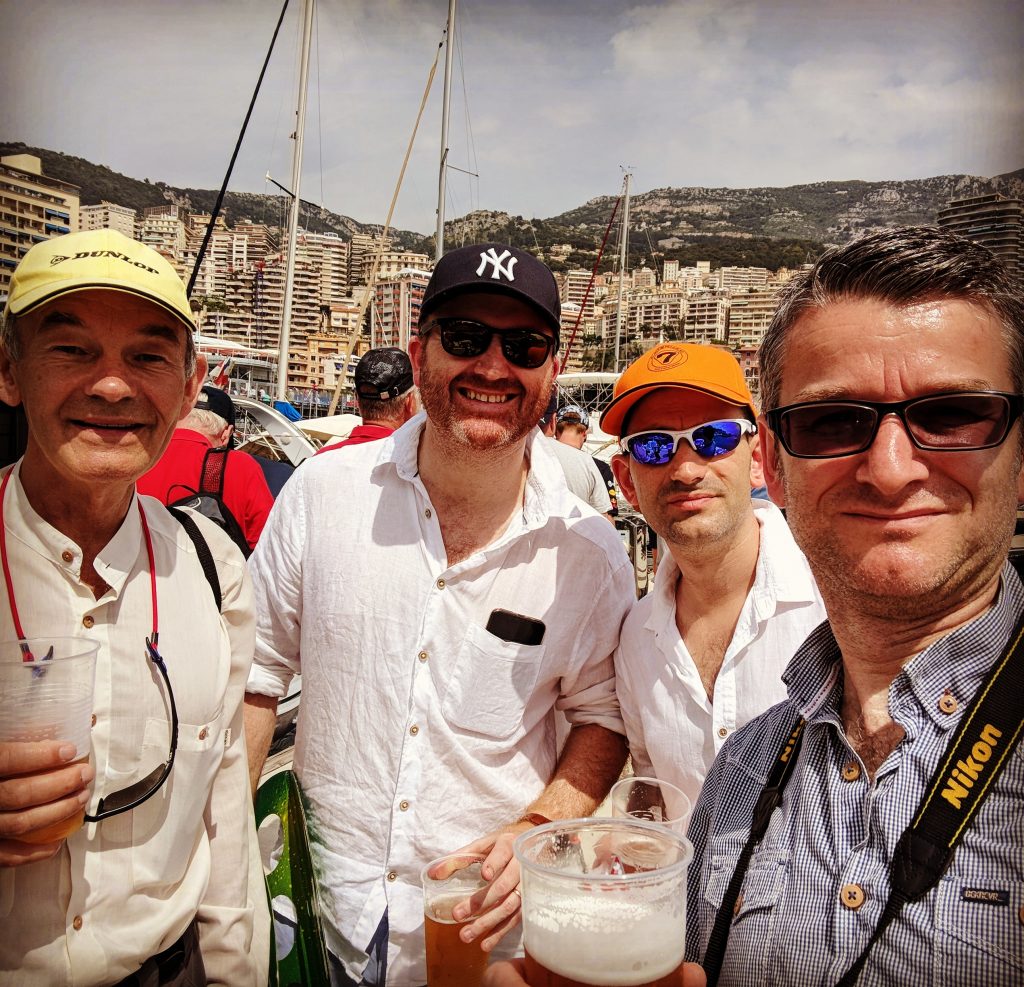 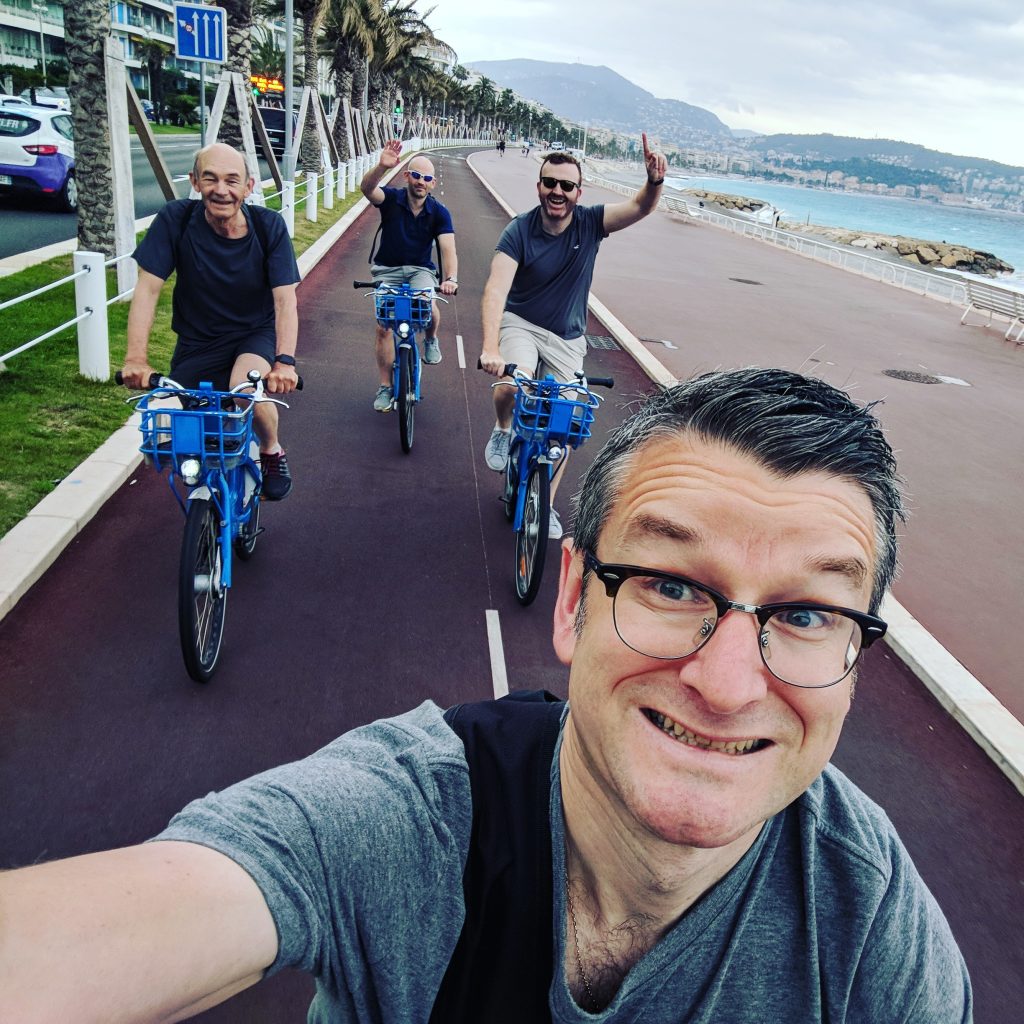 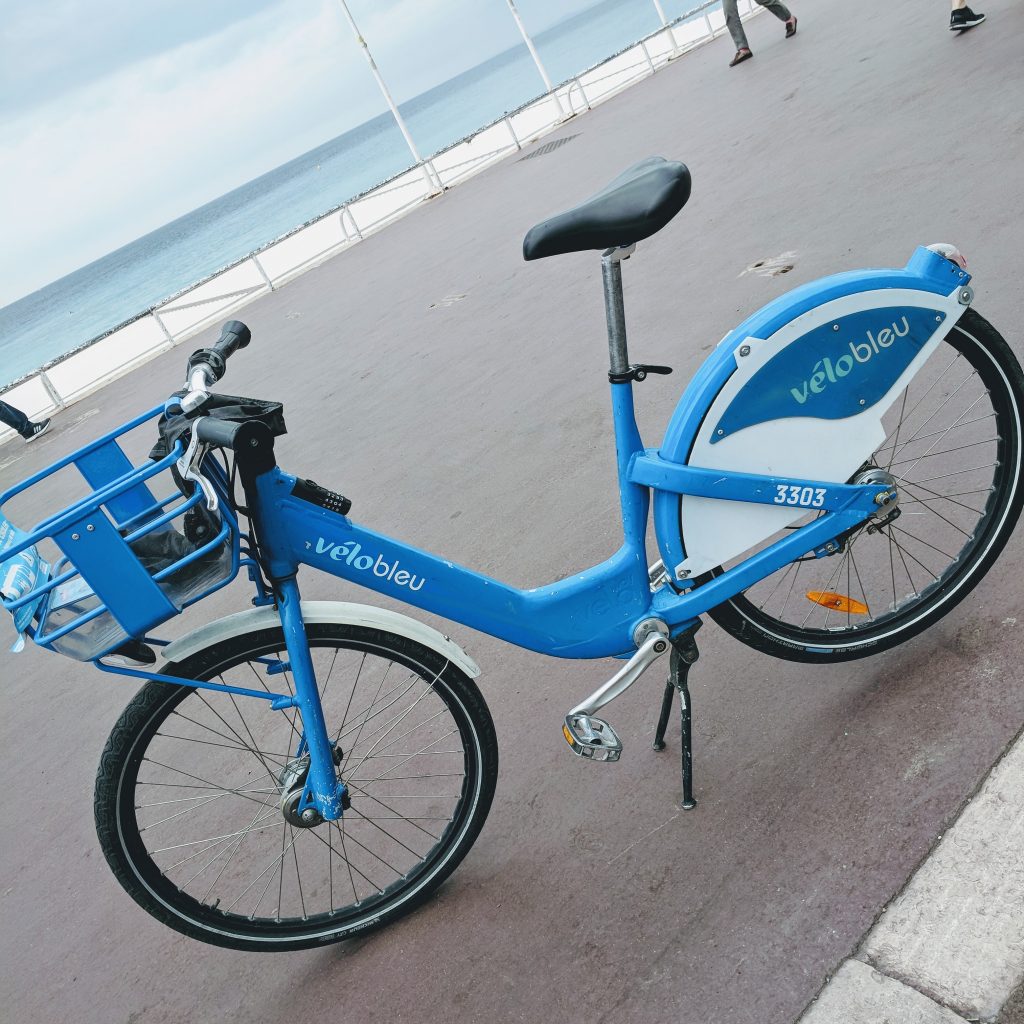 I’m also excited that my parents and Sister Claire are coming over for the weekend to support me on this ride.  Hopefully they will be able to catch me at the finish.  Just the small matter of a house move to sort out before I get back into training.