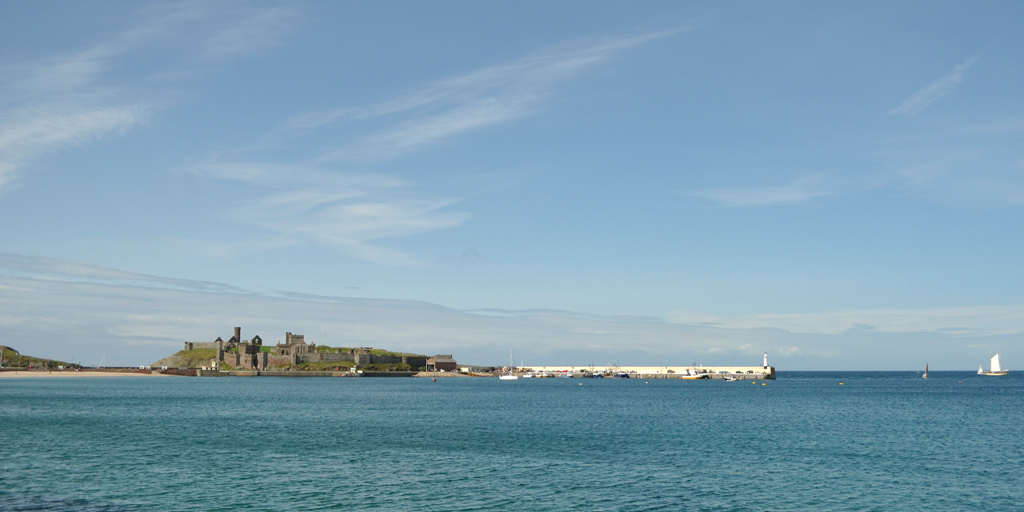 A short report this week (… and there was much rejoicing…)  Sunday was pretty chilled, a relaxing breakfast and morning in our sun trap back garden.  Health wise, feeling good after a restful few days after being discharged from hospital.  Nothing much exciting to do as I was “focused on chilling” in preparation for returning to work on Monday.  We did dip into the Royal Marsden Cookbook to make evening meal on Sunday, this time Angela Hartnett’s  Pea and Pancetta Risotto, which was very tasty!

On Monday 21st I had my first consultation with Dr Patel since diagnosis to see how things were progressing.  I can only say, a happy consultant is a happy patient.  All key indicators moving in the right direction or holding their own for now.  We’d continue with weekly blood tests and schedule another consultation for mid September.  I nearly avoided the “sharp scratch” if Dr had have been 5 seconds quicker; Monday was also blood test day, but it turns out, my last tests from hospital on previous Thursday were sufficient.  The good news from the doc more than made up for it, especially as he also cleared me to fly to the Isle of Man on Thursday to catch up with the in-laws for my father-in-law’s 70th birthday celebration.

For the rest of Monday to Wednesday, it was back to “normal”, working from home.  In general I was feeling strong, had energy for full days work. 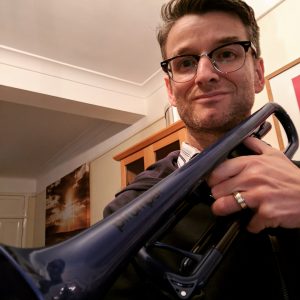 My new toy arrived on Tuesday, a pTrumpet, which is a plastic trumpet.  With my immune system being low, playing brass instruments would be a bit risky as they harbour bacteria, and I am worried about disinfecting/cleaning my pro-level trumpets often.  The pTrumpet however can be disinfected with standard products easily after playing.  It plays surprisingly well, valves a bit clunky and doesn’t sound too bad (no where near as good as my Eclipse of course).  It will do me fine working through rudimentary exercises as I build my chops back up.

On Thursday morning, at 6am we were up in time for our taxi to City Airport.  As a precaution, I’d paid for an allocated seat on the plane. How they can justify £12 for this privilege I’d really like to know, when once their check in process on their website is built, it costs them little to nothing.  City Airport has changed a lot over the years I have been travelling back and forth to the Isle of Man, but it is quite a busy hub.  We were in time to have a quick breakfast before boarding.  It was also medication time so not sure how many were freaked out to see someone knock back a few pills before getting on a plane (quite a change for me, it’s usually a few beers…. not out of fear of flying… just because..)

We arrived on time on the Isle of Man and were picked up by my mother-in-law.  We quickly sussed out who was where and who was arriving when (brother-in-law’s family already on the island, glamping in the luxury wigwam cabins at Knockaloe Beg Farm…..) so made arrangements to catch up.  Peel beach was the location (feature picture above is Peel castle) and as you see from the picture it was great day to get some fresh sea air.

It was at Knockaloe Beg Farm, after some cricket and general horseplay! I took the opportunity to disinfect the entire family with the wire brush and dettol in the hot tub that was with the hired wigwam.  Well, I had to take precautions, like doctor said 😉 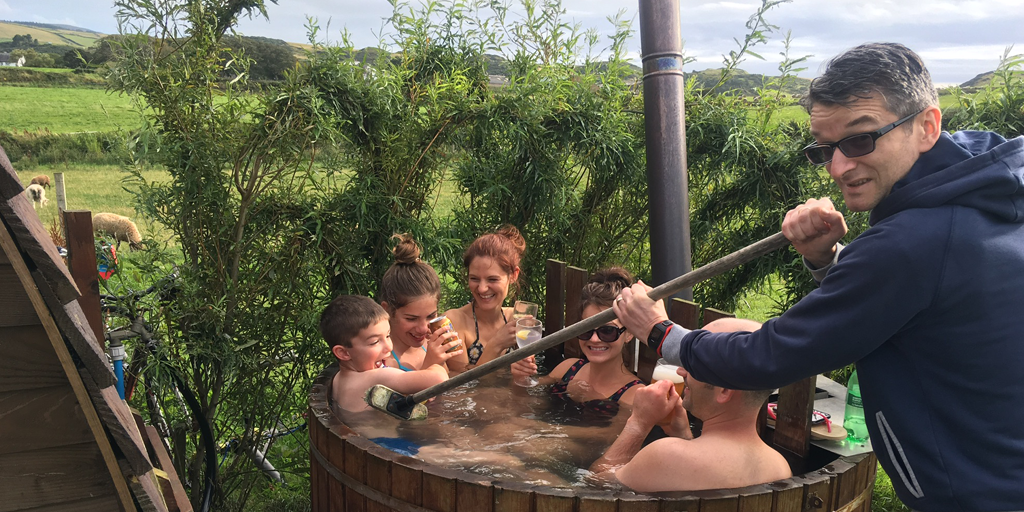 The long weekend was great, it was great to get out and about and go for walks and see the sights of the Isle of Man again, Bradda Head, Laxey, a day on Garwick Beach.  I was able to keep up with all the shenanigans with my Niece and Nephew (and Pa!), watching them on go-carts (didn’t fancy the bacteria risk of a hired full face helmet) and playing crazy golf. On Friday night we went out for a great meal with MrsQ’s siblings and husbands, wives and partners (well, they all have 1 each… so 8 of us..) As I’m not partaking in the odd sherry like I used to, I was designated well, designated… they don’t half talk some horlicks when they’ve had a half! 🙂  It’s a shame I had to avoid the seafood, as I’m quite fond of a plate of Manx Queenies.  Next time!

On Saturday we went to the TT Grandstand prior to the ClassicTT racing to soak up the atmosphere before the racing.  I did have to go and take a rest after this as all the activities were catching up with me.  I was just tired, nothing else going on, temps were good.  We had great meal Saturday evening prepared by my mother-in-law, we even needed the “emergency chairs” to fit all 12 of us around the table. All good fun though and tasty food as always!   Sunday’s celebration meal (again, Queenies on the menu to taunt me…. ) was a great event for Pa (kiddo’s name for father-in-law), to have all his family and close friends to celebrate was marvellous.  I know where to go when I’m in need of a wee dram for the next while… 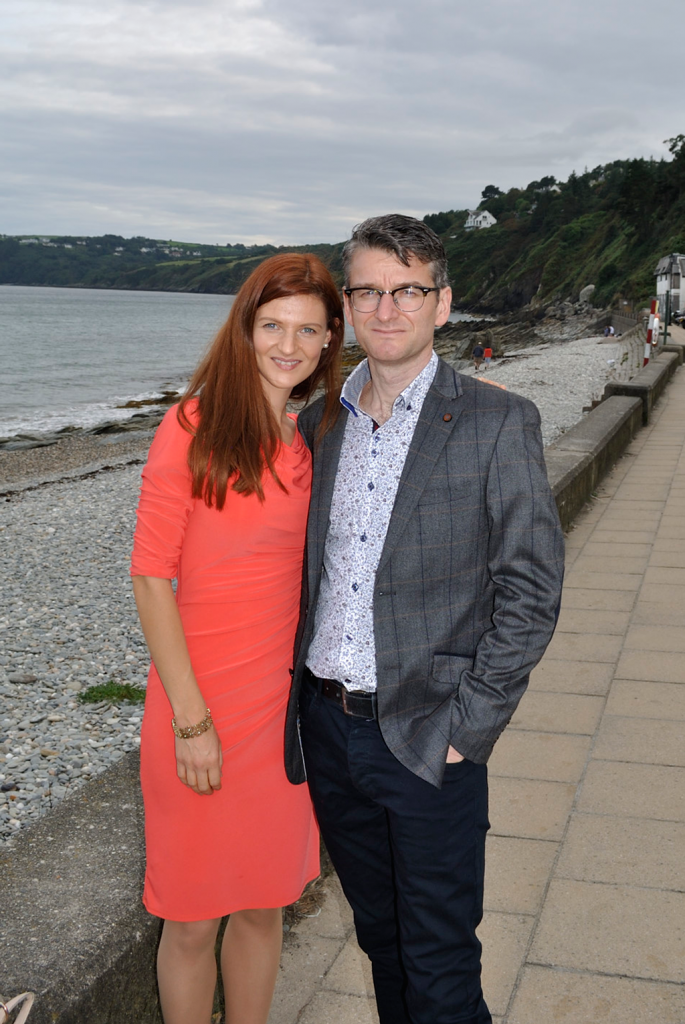 Mrs Q and I on Laxey Prom.

The long weekend finished with one final family gathering at The TicketHall restaurant in Douglas for the famous Fireman’s breakfast (served on a shovel).  I didn’t partake this time as I tucked into a 3 egg omelette back at the house as dozens of eggs (farm fresh organic!) were bought in for me.  I did however enjoy a slice of traditional Manx Bonnag which was a first.  Very tasty! 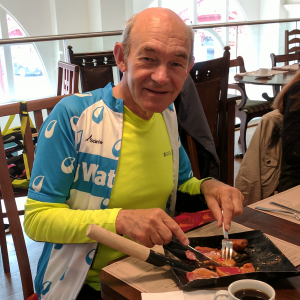 Pa enjoys his Fireman’s Breakfast (after 10 mile cycle of course!) 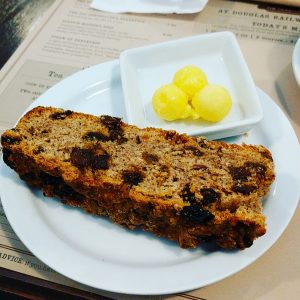 Health-wise, I am feeling stronger each day.  I am aware I have to take things easy when my body says so.  I am still having some night sweats which I will have to raise with the medical staff next time.  It’s been 3 weeks since chemo finished, and I’ve made it over a week without having any side illnesses so fingers crossed this will continue.  It will be interesting to see how much weight I’ve put back on, hopefully some, especially after the amount I ate back on the Isle of Man (Update, this morning 29 Aug, I’m 65kg!!, or 10st3lb in old money).  I can only guess that fighting these illnesses does consume a lot of calories but I’m conscious to ensure that I’m getting good balanced nutrition.  Back to work tomorrow, blood test tomorrow, hopefully I’ve reached a “modus vivendi” with this condition for now, but I’m still fighting the hairy fight with all of your support and kind words, and before anyone asks “Am I OK?”  Yes, I’m OK, better than OK.