Bit of a late posting on this topic really, but after many hours of practice, rehearsals, ups and downs, highs and lows in terms of morale, the day came, we waited our turn, went on stage and delivered a performance more or less to plan.  A short time later, Regent Brass were crowned 2013 London & Southern Counties Area Champions (Championship Section) by the judge, John Berryman.

There was much rejoicing… 🙂 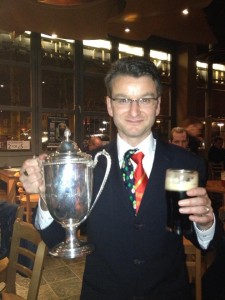 So what does this mean?

For starters, an invitation to compete in the National Finals held in the Royal Albert Hall, London in October, the “holy grail” of many brass band players.  I have been fortunate enough to qualify previously when with Aveley and Newham and will never forget that feeling walking out on stage for the first time.  I look forward to sharing this experience with my chums in Regent Brass.

The contest win as also resulted in increased Ranking Points on the 4BarsRest (and other) Ranking systems.   And we all know that points mean prizes, so increase in points may mean potential invites to other contests, such as the Spring Festival, held annually in Blackpool, or the All England Masters, held in Kettering for which we received an invite this year.

Working on Eric Ball’s Kensington Concerto (the set test for the Masters) certainly presents different challenges to the Area set test, but it is proving enjoyable.  It is certainly a different skill and discipline playing music of that era with modern brass band instruments.

Will the hard work pay off this time? Who knows, different set test, different venue, different competition….. oh, and we have the SCABA Entertainment contest in the mean time.. for which we have chosen quite a colourful program……