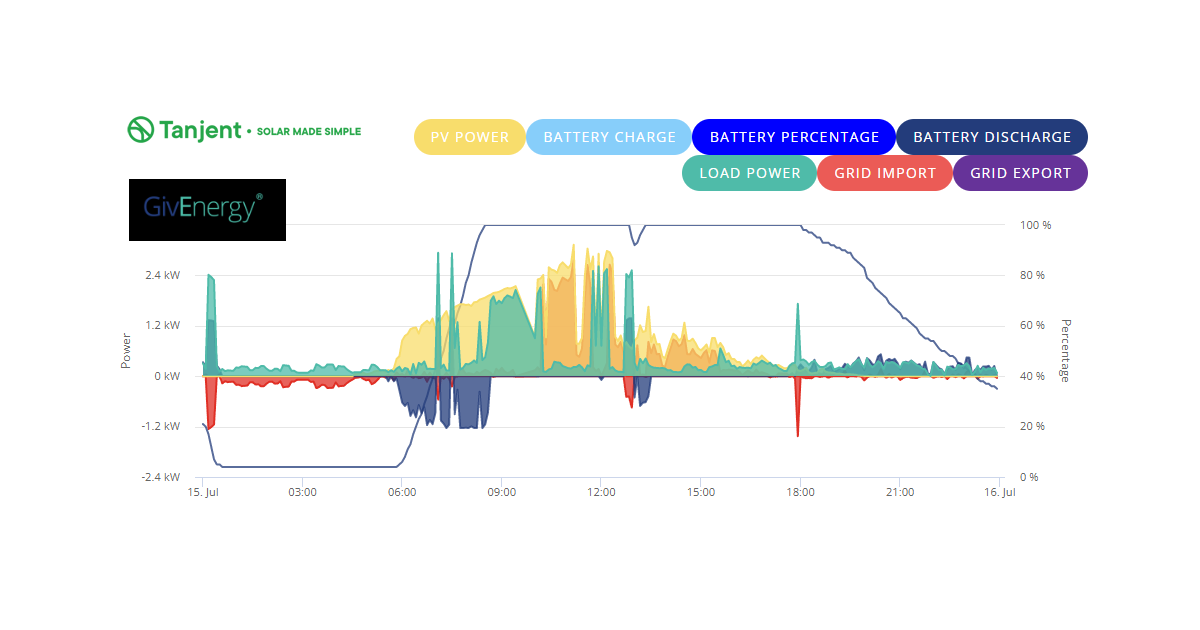 Having domestic Solar Energy is something that I always had in mind as a house owner, originally more a contribution to being more environmentally friendly rather than as a pure cost saving benefit. However, as we know with recent domestic energy price rises (how are those profits and tax cuts that the Energy Companies are enjoying sitting with you???) the cost has obviously come in to play, however, this wasn’t necessarily the driver at the time of ordering.

One of my concerns with the domestic solar supply installation industry, is that in many ways, as a hot topic for consumers (in recent years, there were government grants and various schemes to encourage purchase), a lot of the companies seemed a bit too salesy / lead generation / marketing companies that weren’t really that convincing at a deeper level. Also, many of these where giving a hard sell on a pretty incomprehensible finance model too. Since reading The Money Diet and getting my finances in order many years ago, I tend to prefer getting a price, saving for and paying for something, rather than going on finance (as a general rule!).

Obviously, it’s a reasonable cost up front for such a project which we funded through a money builder policy maturing in August ’21. Apparently, I had a grown up moment 20 years ago or so and took out this monthly policy to squirrel away some money each month for a future project. In addition to funding the solar project, we also renovated our main bathroom in the house. Boom!

I spoke to two companies in effort to get quotes. The first company, felt more lead gen / marketing type but I had the call, which turned out to be very short. After doing their aerial survey while on the phone (i.e. google maps / street view it would appear) they declared the roof on my house unfit for such a project and ended the call. I was a bit stunned as it is quite a large roof space (over 2 meters at the apex in the attic) with sun in morning at rear of house, and from afternoon onwards at front of house.. panels front and back – bosh! but unfortunately not according to this company, with no reason given.

The second company, Tanjent Energy the call was unfortunately going along the same lines, until this time, having been through the first call, I asked why? The answer was, the age of the house, and more importantly, the age of the slate roof tiles. Our house is over 100 years old with a slate roof. From experience, the solar installation companies decline to install on these roofs due to the fragility of the slates. The installation process could potentially do a lot of damage resulting in the need for replacement slates, which adds an unknown cost to the project. Well at least I now know why, and can share this with others. Note there may also be conservation reasons for a decline from a solar company also, so bear this in mind too.

Thinking quick, I asked for the engineer to check out our garden office roof to determine it’s suitability. It’s a single story L-shaped building also with slate roof at end of our garden, approx 10 years old. My question was, would there be enough surface area to host enough panels to make what could be generated worth while – in comparison to the the house size. After a quick aerial survey online, the engineer agreed it had potential, had enough surface area to make the project feasible, so we arranged for site visit survey to see and check for potential shading issues (there are a few large trees around). The other issue was the nature of the mains supply from the house to the garden room (approx 30m from house) and having building regulations certificates.

After site survey, we agreed to proceed. The system designed would have 9 400w panels on the roof of the garden room, an inverter, 3.6kW battery pack and a Solar iBoost, which is rather clever piece of kit that controls our immersion heater (for my Irish family and friends, who grew up in houses with an immersion heater, brace yourselves…!), our immersion is now ON all the time – a controller ensures that “surplus” energy is used to power it, so solar powered hot water almost every day (at the moment).

The Garden Room as well as being my WFH office, practice room, cycling training room, our library and er.. storage area (ahem) has become our electricity generating station too.

Since installation, we are getting approx 68% energy from Solar, which has saved us significantly since the domestic price rises. We still pay the standing charge. Another bonus is the hot water system, which when it is just 2 of us here, means we don’t need gas boiler on to heat water, so now only using gas for cooking. The pattern is, from the solar system is to feed house, charge battery, heat water, then export to grid during day, harvest from battery at night. Any higher demand during the day is handled from feed in from grid. Obviously, in the winter, shorter, cloudier days we will incur more costs, but will review situation after year to see if we might benefit from a second battery.

We’ve yet to start receiving income from what we export to the grid. This part of the setup is the most farcical I think, as with British Gas, you have to download a form, fill it out, scan it and email it back, with photos of your meter and all manner of stupidness, to receive a fraction per Kw what they charge us (hence the thought for more battery). Other suppliers may be more efficient.

The total cost of our system was less than £8000 however, this is mainly due to it’s “small” size and not having to pay for scaffold hire (big thanks to our neighbours who permitted scaffold on their property for a couple of weeks). The install didn’t go as smooth as we would have wished, but as you can probably imagine with the soaring energy costs, demand from installation companies, parts and components is high. With that in mind, I still found that the team at Tanjent Energy and their installation partners really top class.

The GivEnergy Portal shows various performance graphs and gives you full control of your system.

My advice to people, if you can afford the purchase, your roof is suited (both age and aspect) and you plan to stay in house for 10 years or so, go for it. We know it won’t cover 100% of our energy costs but it is contributing to monthly savings for both Electricity and Gas. We will consider more battery capacity as and when we come to having an electric car charger installed (assuming work will allow me an electric vehicle on LPS scheme? 🙂