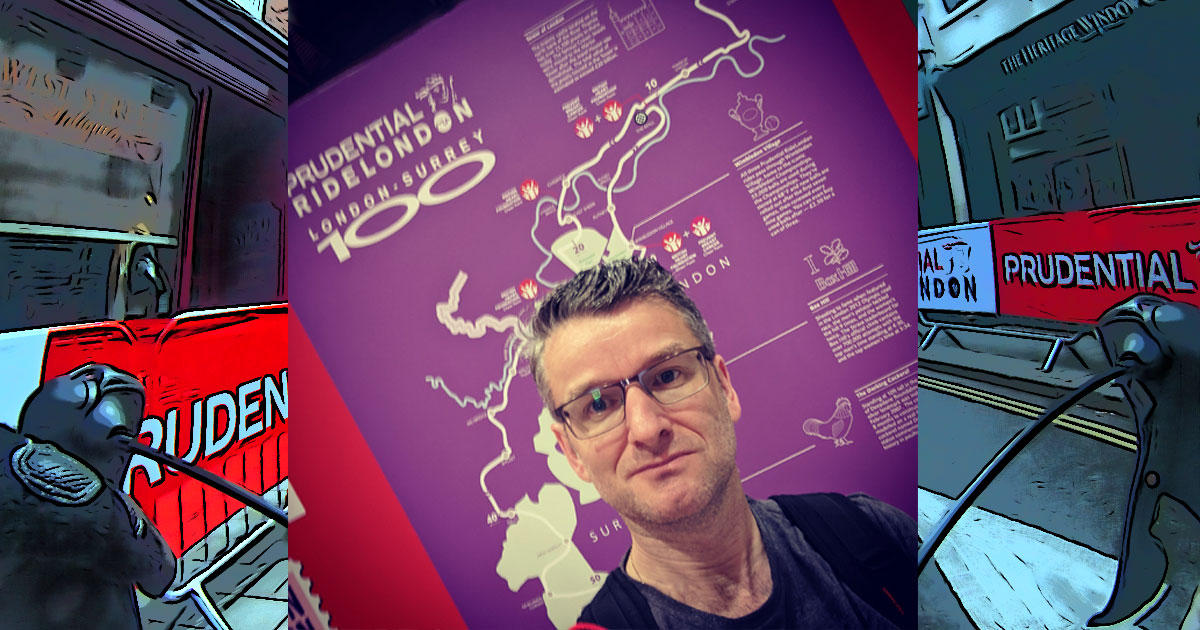 Better late then never but here is my post relating to this years Prudential Ride London which took place on August 4th. I chose to raise funds again this year for the marvellous people at Bloodwise and it was a privilege again to ride in their colours.

The ride this year could not have been more different than 2018 in many ways.

Firstly, in terms of my preparation and training, I exceeded my training miles this year over 2018 by a combination of participating in other sportive rides, the Cambridge 100 – I’ll never forget that wind in the last 30 miles as we rode around the Fenns .. who’s idea was that?? :), many hours on virtual rides on Zwift plus my usual and some new routes around Biggleswade near where I live.

Secondly, I was on my own.. (cue sad violin…) none of my chums managed to get ballot places this year, so I was essentially in competition against the clock.. I still won, more on that later. On the upside, I did get good nights sleep before ride having luxury of my own hotel room, no snoring roommates… waiting an hour for MrP to finish putting his eyes in in the morning (I’ve learnt after many ski trips with MrP to get up first!!! 🙂 )

Thirdly, my now famous crazy family support couldn’t make it this year. Last year they spent a few hours with the Bloodwise team at mile 99 cheering on the other riders all decked out in bloodwise gear and “temporary” tattoos. The staff from bloodwise fondly remember them and were very grateful for their extra cheer on that rainy, windy day in 2018. They’ll be back next year if I get a ballot place (or I join for charity)… yes, I’m in the ballot again. Despite not having my own personal support team, I am hugely grateful and thankful to all the members of the public and the other charity’s who cheer us on en-route. On the ride also, especially on the hilly parts, riders tend to gee one and other up too which is good, and when you see someone in your team colours, you give one and other that knowing nod ‘chapeaux’ and some words of encouragement.

Fourthly, the weather.. ideal.. couldn’t have been more different from 2018. It was cool starting at 7am and warmed up during the day, but never got too warm or windy. The going was good and I did see a few being treated for falls, but I wasn’t held up at any point for safety reasons. It was also good this year that there were marshals in advance of some of the descents where there were accidents in previous years forcing us to be more careful, which at the end of the day, is good for everyone.

My official clock time was 05:33:51 which I am really pleased with. I rode, as 2018 non-stop (except for the traffic stops from Kingston on, which is a bit annoying…). I appear to be getting faster as I get older, but I’m fully aware that this is due to increased training. I have the Zwift platform to thank for being able to pace myself over the hills. I don’t have the full on flashy fully connected turbo trainer, so I ride on Zwift with fixed resistance which seems to have helped me pace myself on inclines, in fact I got to the top of Leith Hill and said to myself, is this it.. I was waiting for that final dogleg nasty right turn steep bit that I seemed to remember… I could have upped the pace a bit… ah well… next year!

At the end of the ride, it was great to hear a shout out from my trumpeting buddy Jim, who had completed the 46 with his wife Steph. I also received a barrage of WhatsApp / Text messages from my supporters from afar, which was great. After a short recovery and brief chat with Jim/Steph, I locked up bike in secure parking (lets face it, there are far fancier bikes than mine to be nicked..) and headed of to Henry’s for the team Bloodwise reception. At the reception, after hovering up some food and downing a well deserved pint, I had great time catching up with other team Bloodwise riders, swapping stories about the ride, our training, our lives in general, and the obvious, why Bloodwise, what is your story? The main topic seemed to be the recent airing of the documentary on the CAR-T therapy, which is promising to be a real breakthrough in many cancer treatments. I watched this program on TV (it may be still on catch up) and the bravery of those who volunteered for the program was off the scale.

After a couple more beers and swapped stories, it was time to brave the London traffic and head back home, where I would meet MrsQ (who was away rehearsing at the time for her forthcoming show at Frinton Summer Theatre) for dinner.

In terms of fundraising, TeamBloodwise raised in total £146,500! during the Prudential Ride London. I would like to thank all my sponsors again for their donations. The following is from Bloodwise email, detailing how donations are used.

What will happen to your donation?

£45 funds an hour of support by live chat, email or phone so people can turn to our blood cancer support team in their hour of need
£50 funds a specialist nurse to attend one of our education days
£500 funds two weeks worth of essential laboratory supplies
£998 funds a PET scan for a patient
£2,300 buys a state of the art computer to analyse large data sets and reveal new insights into blood cancer allowing scientists to develop new treatments

I had PET scan as part of my treatment, so funds raised this year from your donations have covered cost of this part of my treatment. Thank You. I remember being told that as I was radioactive, I had to stay away from people, especially those who may be pregnant. It was summer and nice day, so took a couple of work conference calls from the Park near the Royal Free in Hampstead before going back into the office. 🙂

100 miles on closed roads is really a marvellous experience. It may seem daunting to many, but with training and appropriate gear it is perfectly achievable (he says!). The scariest part of the weekend was the ride from Kings Cross to my hotel in Canning Town, following satnav in my ear on cycle routes. Those canal paths are narrow… and gravelly in places. Fortunately, I didn’t fall into the canal or experience “the P word”. I was a bit worried a bike wouldn’t be appreciated in the hotel, but I and all other riders staying at the Ibis in Canning Town were welcomed with a bottle of Lucozade. This was such a nice touch. The ride to the start at Stratford the next day was amusing, as I rode through the streets, I encountered more and more riders, looking perplexed.. which way?? Follow me! I’ve got SatNav…. where would be without SatNav. 🙂