No gigs to announce.. 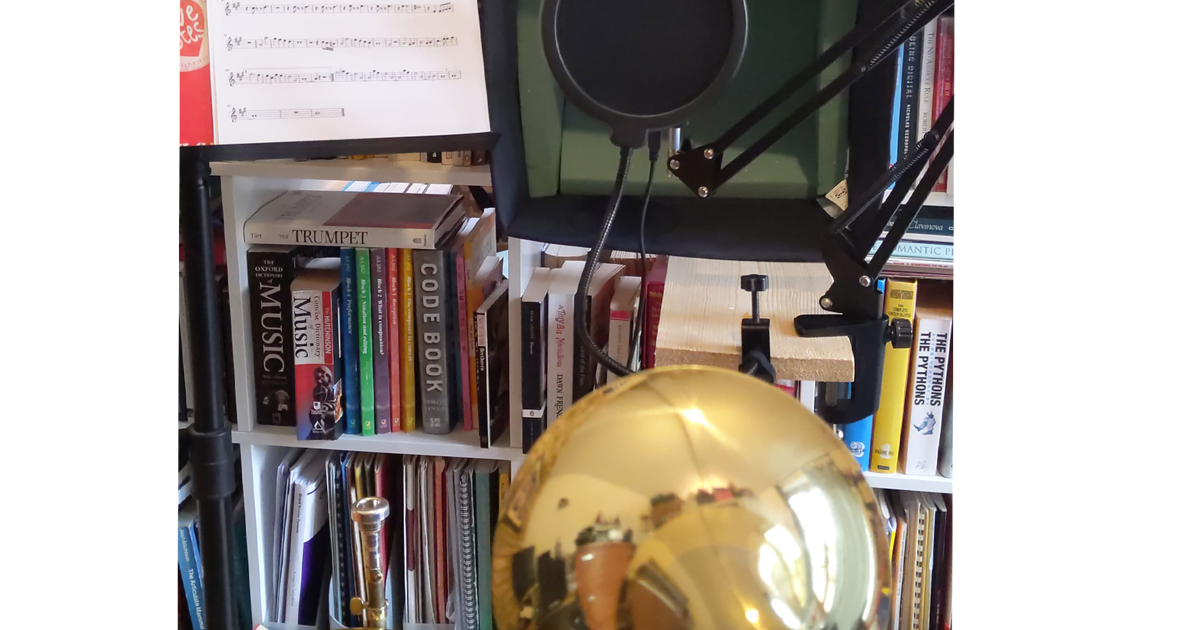 Here we go, it’s 2021 and I have no gigs to announce. I say that, as January is usually when I post information here on the first few of the year, The City of London Symphonic Winds, followed by The North London Symphony Orchestra… with a usual post related to Brass Band Area Contests (I’m not missing having to attend eleventy-billion band rehearsals to be fair).

I have so much sympathy, if that doesn’t sound too patronising for those who rely on the performance arts to make a living. All we can do is crowd to the concert halls and theatres when all opens up again.

It’s been a while since my last post here which was about my Blood Cancer UK summer fundraiser. During training and the month of the event my trumpet playing took very much a back seat, where at best I was just about managing to blow a few long tones each day at most. This would have been fine, I guess (well, there was no sign of any gigs resuming in August / September) except that the Hitchin Band had entered the Cory online contest. To say, I had to do quite a bit of multi-tracking due to being out of shape is a bit of an understatement. Anyway, I got my soprano cornet parts recorded and submitted in time and our team at Hitchin put together a great video, for which we won some prizes. Check out our performances here!

As we were not able to rehearse at Hitchin, we had fortnightly Zoom master class sessions with various names from the brass band world. Lots about how to practice etc, much of which I’d heard before and after my struggles with getting my lines recorded for the Cory contest, I decided I needed to put all this advice and learning into practice (to be honest, get back to what I used to do years ago!)

Gamification is defined as the application of typical elements of game playing (e.g. point scoring, competition with others, rules of play) to other areas of activity, typically as an online marketing technique to encourage engagement with a product or service.

What has this got to do with Trumpet practice you say? Well, I’ve applied it in terms of:

Why do this? you say, Why not…. I say. Many of us do this all of the time with other aspects of our lives, from actual gaming, to sports (Strava, MapMyRun etc) to other fitness trackers, fitbit, apple watches. They, and many other things we do adopt gamification techniques to keep us engaged in the product, rewarding us with badges, scores, discounts (it’s becoming a more common marketing technique) to keep us engaged in the product or service. We all get those weekly emails from fitbit nudging us to do more activity this week as compared to last week??

So, ok, I’ve not taken things that far, but having organised my practice routines in this way, and logging the event (in a google sheet) does introduce an element of gaming. Who knows, maybe there is a market out there for a Strava like companion app for musicians.

Many years ago (now! eek!) I had the fortune to have trumpet lessons with Howard Snell while we were both resident on the Isle of Man. In truth, I bought his book “The Trumpet” and devoured it cover to cover and then spent the next 5 or 6 months putting in to practice what was in book before I had the courage to actually phone and ask for lesson. I recommend the book to any player. It really does break things down into actionable steps you can use to organise your practice and improve your playing.

One of Howards mantras (I guess) about practice was “Little and Often” but also to have structure to know what you are going to practice, focusing on playing skills and the repertoire you need to work on. During our Zoom sessions (of which Howard was one of the guest speakers) we had some speakers who also had worked with Howard in the past, also passing on this advice.

I divide my 1hr sessions into the following areas:-

To ensure I’m not playing the same exercises over and over again, I’ve devised 8 routines comprised of exercises from the various method books I’ve collected over the years, namely Vizzutti, Arban, Rigdeon, Collins. For example Routine A is….

which covers the playing skills I need to cover. I don’t exclusively do these routines, if I wish, I can play from study book (Charlier for example) or do other exercises on top or instead (Cichowicz, Schlossberg, Arban, anything) or spend time on some repertoire, but usually after doing one of these routines as minimum. I cycle through the routines A-H.

Other rules of the game include not beating my self up for missing a day, however, I do try and not miss two days in a row. I mainly practice on my Trumpet but sometimes mix it up. When we get word that we can rehearse again, I’ll start doing additional work on Soprano Cornet to get in shape.

I have been working from home since last February (wow, approaching a year) and do appreciate that I have the time and space to fit this around my daily commitments at present. When we get out of this pandemic situation, it maybe more difficult to maintain, but then again, I’ve been doing this daily since middle of August 2020 so have reinforced the habit I guess. I just hope I haven’t reinforced bad playing habits!