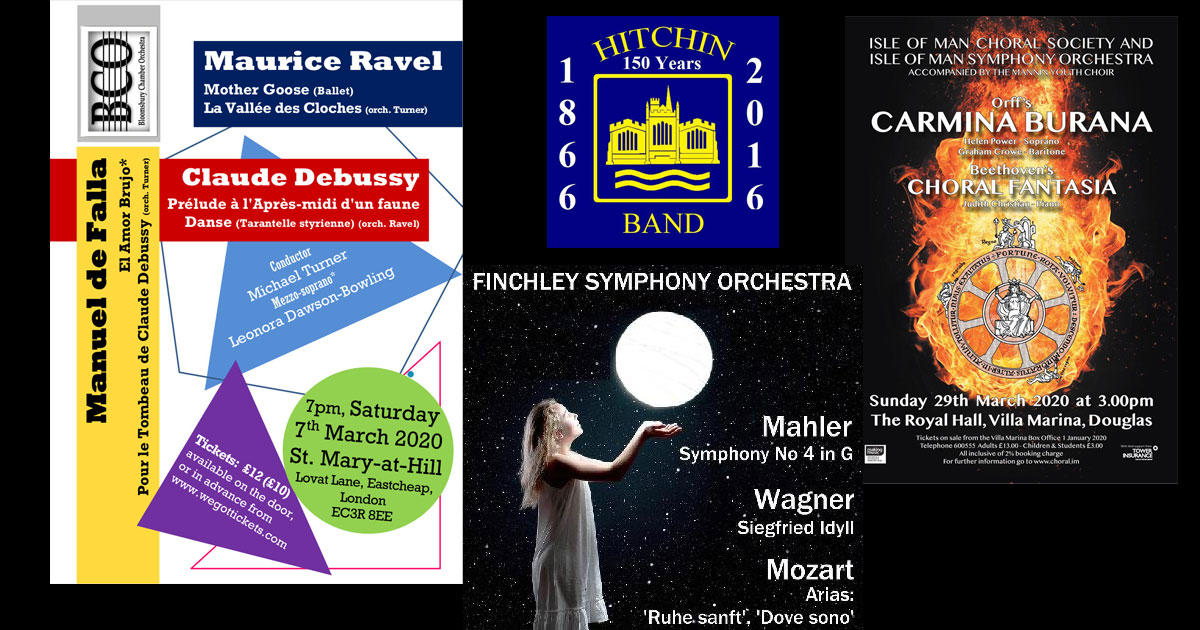 March 2020 is going to be quite a busy and diverse one from a trumpeting perspective with a very different gig each weekend where I will get to perform quite a wide variety of music and musical styles.

It all kicks off on Saturday 7th where I will be playing with the Bloomsbury Chamber Orchestra. This year, BCO are playing music by Spanish and French composers. I will do my best to channel my inner matador in Manuel de Falla’s “El amor Brujo” (The Bewitched Love), the haunting story of an Andalusian gypsy woman!

The following weekend, on Saturday 14th, I will be playing with the Finchley Symphony Orchestra, who are playing works by Mahler, Wagner and Mozart. When asked to play concerts, it is extremely difficult to resist the lure of playing Mahler, so I’m really looking forward to performing Mahler’s 4th Symphony again (anyone doing 3,7,8,9 give me a shout so I can complete the set 🙂 )

Next up, on Sunday 22nd I will be competing in the London & Southern Counties Area Championships with Hitchin Band. This is the bands 2nd year in the Championship section, and first “areas” contest under MD Nick Garman. As with many bands up and down the country, we’ve been working quite hard on the set test, Philip Sparkes’ “A tale as yet untold”. A top two placing will result in us being invited to the National Finals in the Royal Albert Hall. I’d say fingers crossed except (probably apart from trombone), it makes playing brass instruments a bit tricky.

Finally, on 29th March I will be playing with the Isle of Man Symphony Orchestra & Isle of Man Choral Society in their performance of Carl Orff’s Carmina Burana and Beethoven’s Choral Fantasia. I last played Carmina Burana in 1989! so a few years ago. This performance will be quite a family (in-laws!) affair. MD is father-in-law Julian Power BEM, mother-in-law sings in the choir, and guest soprano Soloist for this performance will be MrsQ, Helen Power! Rumor has it that Tom Power (brother-in-law) will be making a “for one night only” guest appearance on 3rd Trumpet too. Should be a good get together on the Isle of Man, and of course will be great to be on the Island when the Manx Youth Band / Manx Concert Brass launch their 50th year celebrations.