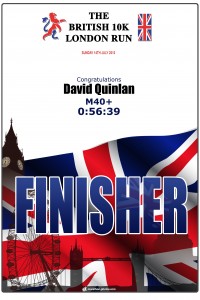 On one of the hottest days of the year, I run my first ever 10k, the British 10k London.  Setting off at just before 8am on the tube to Victoria with buddy Dale to catch up with other friends (Yvonne, Matt and Lisa) at the starting line.  Never having done such an event before, I was a bit surprised at the chaos at the start, where  I understand, for other such events on entry you specify what time you think you will finish, so you are given a starting time.  This was free for all, with lots of barrier jumping, pushing, jostling for position to get started.  The result was, for the first kilometre or so, you had to dodge a lot of people WALKING!! and be aware of faster joggers coming up from behind as you got up to your pace.  I won’t go on about it here, the organisers are getting enough grief on their Facebook page.

The route was very good, nice and flat to be fair, although turning down on to embankment and getting a whiff of the river for the first time was a bit of a shock! 🙂

Having previously only ran up to just under 6k, I was a bit concerned about running out of steam due to stamina and the heat, but I managed to hold my pace quite well.  I only really struggled when the old knees started to give at around the 7.5k mark. Yes, I should have listened to my physio (and my massage therapist wife! http://www.helenpowermassagetherapy.co.uk ) when they told me it would happen! Suffering from Iliotibial band syndrome which means since shortly after the race.. any walking off the flat (up hill, down hill) any steps was agony.   Improving now, but I have learnt my lesson!

So, I completed in 56:39 which I am pleased with, under an hour in that heat.  The support from the crowd along the way was fantastic, and thanks to the people manning the water stations (although, opening the bottles would have helped!)

After the race when we all caught up and recovered somewhat, we went wandering around Soho, so couldn’t resist cheesy picture in Carnaby Street.. yeah baby… 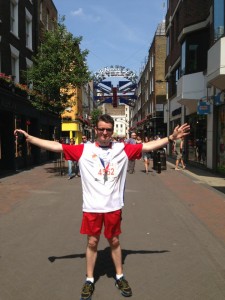 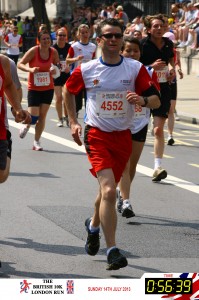